BOSNIA: The IMF requests welfare adjustement. ¿ more of the same?

The IMF, which has launched its first review of the 1.2 billion euro standby arrangement for Bosnia, said it would disburse its second tranche only if the two local governments agree on 2010 budgets and welfare reform.

Bosnia, made up of the Muslim-Croat federation and the Serb Republic that have own budgets and co-finance the central government, needed the IMF stand-by deal to plug budget gaps and secure fiscal stability at the time of global economic crisis. 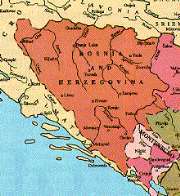 But as revenues continue to fall, the Muslim-Croat federation will need again to restructure the 2009 budget, said Finance Minister Vjekoslav Bevanda. Revenue in the federation has fallen by about 18% in Jan.-Sept. 2009.

"We have done our obligations relating to rebalancing of the 2009 budget," Bevanda told a news conference last week, explaining that the budget, revised upwards in August to 2.13 billion Bosnian marka ($1.6 billion), will be now cut by 59 million marka.

Bevanda reported that his ministry has projected a 2010 budget of 1.7 billion marka but that the government rejected it because various ministries have put forward demanding budget requests.

"We shall propose the same budget again," he said. "All we can do is to stand by the realistic projection of the budget."

Bevanda said that without the IMF money, the federation budget for 2010 would have to go down to 1.4 billion marka.

Bosnia’s central government, which is co-financed by the regions and has seen problems in passing budgets in previous years, drafted a 2010 budget of one billion marka, 1% less than this year, it said in a statement.

The Serb Republic wants a central government with a limited authority and opposes increasing its budget while the Muslim-Croat federation wants a stronger cabinet, able to negotiate integration with the European Union and NATO.

Serb Republic Finance Minister Aleksandar Dzombic has said that the region’s 2010 budget has been projected at the level of this year’s rebalanced budget of 1.6 billion marka.