The economic crisis in Cyprus erupted during the second cycle of the European recession of 2011 as a result of harsh austerity policies imposed since 2010 in Europe. It is a new crisis born out of a failed response to the original European crisis. These policies were (and still are) a basis for the divergence between Europe’s centre and periphery, meaning the countries of the core of the eurozone, with Germany being the dominant economy, and those of the southern Mediterranean.

Cyprus’s main problems were its inflated and unsustainable financial system, whose assets had reached eight times the GDP of the country, and the riskiness of the financial system that was exposed overwhelmingly to Greek bonds. It 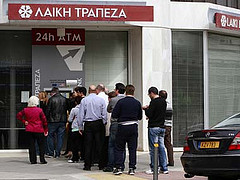 is worth noting that Greek bonds suddenly lost their value because of the lending terms imposed upon Greece by the Troika - the triumvirate of lenders to Eurozone countries including the IMF, European Commission and European Central Bank, in December 2012. The crisis in Cyprus, just as in the case of Iceland, can be characterised as ‘imported’.

Cyprus’s financial crisis cannot be characterised as one of public profligacy as other periphery countries have been accused of, in particular Greece. Cyprus’s banking sector did not grow so recklessly and to an unsustainable size in order to best serve Cypriots’s social and economic needs. Despite relatively modest public debt and deficits, Cyprus is now in crisis due to the private financial sector’s rapid and ultimately unsustainable growth, for which Cypriot citizens are now paying. The terms of the revised agreement, despite the focus on levying a deposit tax only on large deposits, still represents an economic catastrophe in Cyprus’s near future, where a downturn more extreme and sudden than even that which has afflicted Greece is now expected.

It is often said that the best way to rob a bank is to buy one. During the last few years, Laiki Bank and Bank of Cyprus lent billions to members of their boards and shareholders without receiving the required collateral and guarantees1. A little-understood but important contributing factor to the Cypriot banking crisis was the investment in and exposure to Greek bonds from the secondary market as Cyprus’s banking business model began to feel the strain of reduced investment flows, due to the European financial crisis unfolding around it. Cyprus’s major banks turned to Greek sovereign debts as a desperate strategy to find cheap but profitable investments, despite the obvious risks from exposure to Greece.

Laiki Bank and Bank of Cyprus, Cyprus’ two major banking institutions, in particular bought ‘toxic‘ Greek bonds in the last few years, often at a discounted value as other European banks sought to divest themselves of the increasingly risky debts of Greece. In one prominent example, Greek sovereign bonds were purchased at an 18 per cent discount to their nominal value through the brokerage of Bank of Cyprus, from Germany’s Deutsche Bank. Deutsche was so desperate to sell that it had even offered 5 per cent commission to any agents who succeeded in selling these ‘toxic’ bonds. This catastrophic investment, whose losses were realized once Greek bonds were forcibly devalued by Greece’s latest Troika deal, represented €100 million euros of revenue for Bank of Cyprus’ brokerage company. Greece’s revised bailout conditions that were agreed by the Troika in December imposed a widely expected ‘haircut’ on holders of Greek bonds, forcing the Cypriot banks to accept major losses. This was the death-knell for Cyprus’s irresponsible financial titans. The likely losses on Greek bonds were widely identified in advance both locally and internationally, yet the Cypriot central bank dismissed them. When the haircut was inevitably applied, both banks collapsed.

The widespread rumours, denied during the last few months, concerning the cutting off of deposits have now been vindicated. The reason for denial is of course that Italy and Spain risk following this crisis pattern and the existing European support mechanism lacks the required surplus to repay such a potentially massive debt. Hence the decision was made to penalise all Cypriot deposits-holders, no matter how small the size of their deposit.

The rejection of this "forced cutting off" of deposits by Cyprus’s parliament should be applauded because it saved small savers in Cyprus and of course in other European countries, ensuring guarantees for deposits up to €100.000 are respected. Of course after the rejection from parliament, the group of eurozone finance ministers returned to the basic principle that the recapitalisation of banks will be accomplished by wiping out a portion of larger deposits, which will nevertheless lead to thorough devastation of the Cypriot economy. It is worth noting that the recent decision of the Troika bypasses the need for approval by the Cypriot parliament because it relates to uninsured deposits.

Despite its complicity in the Troika, the IMF has been widely lauded as it has increasingly gone public with 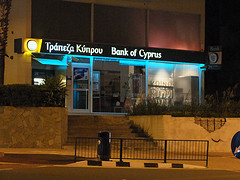 the need for greater realism in the eurozone, in particular about the sustainability of the explosive growth of debt in bailed-out countries. Far from this image of a pragmatic, neutral and credible institution, the IMF - along with its Troika partners - endorsed the nonsensical initial agreement that violated the Europe-wide guarantee protecting small savers’ deposits, and even momentarily risked the stability of the entire European banking system. Instead, the only discernible position the Fund took was to push for the future revenues from Cypriot natural gas deposits to be included into the state budget, dedicating these un-tapped resources as revenues to service Cypriot debt. Of course, the Cypriot government succumbed to those pressures.

To saddle the Cypriot people with a €10 billion loan from the Troika, equivalent to 60 per cent of Cyprus’s annual GDP prior to the crisis, and to expropriate €7.6 billion from the pension funds is of course the most painful solution for the Cypriot people. The only solution that can guarantee their future is the unhindered bankruptcy of the failed Cypriot banks and the incorporation into Cypriot policy of the Iceland model, by establishing a framework for public and social control in order to guarantee the deposits of working people, not international investors and speculators whose interests seem to be paramount in discussions of Cyprus’s future. The nationalisation of oil and gas revenues and their utilisation for social needs could be a significant supporting measure in this difficult endeavour.

It is crystal clear that this debt was created by the speculative and self-interested choices of the ‘banksters’. This is the reason why the cancellation of the memorandum signed with the Troika is also vital. The creation of an Initiative for an Audit Committee, aiming to cancel the repayment of the Cypriot debt is imperative. The creation of such a Commission to examine the source and legitimacy of all public debt is also a legitimate democratic demand of all of the ordinary people in Cyprus who are bearing the burden of the crisis and demand to know its true causes.