In general terms, the purpose of this study published by LATINDADD is to analyze the impact of DTAs (Double Taxation Agreements)on the government financing system and the tax structure in Latin America,and to open the dialogue to establish more progressive and fairer tax systems in the region.

Specifically, the study aimed at:

a. Understanding the content of the policies within the DTAs signed by some Latin American countries, such as Argentina, Colombia, Ecuador,Nicaragua , Uruguay and Venezuela.

b. Gaining insight into the connections between DTAs, and trade agreementsand foreign investment protection treaties.

c. Analyzing the potential benefits and the main disadvantages of DTAs for developing countries, particularly in Latin America.

d. Studying how policies in developed countries might ensure a better distribution of the taxes involved in DTAs for developing countries.

e. Making public policy recommendations from the perspective and in the interest of periphery countries, in order to help improve the tax base of developing countries.

Th e research conducted by Jorge Marchini (UBA, Argentina) has been divided into several stages. Right from the beginning, Marchini reconstructs the link between the neoliberalism of the 1990s and the review of DTAs in this decade, addressing, along the way, the issue of capital flight and protection FDI (Foreign Direct Investment) in the neoliberal days. Moreover, he analyzes the Argentine tax system by making a description of collection and taxes. Finally, he delves into the details of DTAs, their implementation, their principles and the agreements terminated by the Argentine government.

The Colombian case is described by Christian Moreno (CIASE, Colombia),who off ers a contextual analysis of global economic transformations. He also gives an account of the changes introduced into the fi eld of tax and fiscal policy and how FDI was boosted in his country. Finally, he analyzes signed DTAs, their advantages, the obstacles they pose for development, and their impact on tax administration. 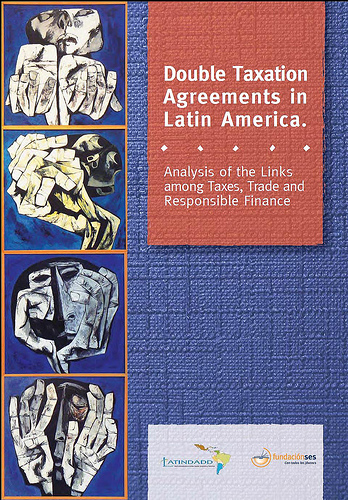 This piece of research takes the various principles applied by DTAs as a starting point and then goes on to describe the fi scal structure of Ecuador and provides a detailed review of signed DTAs. As in the other case studies, it examines a relevant DTA and ends with some public policy recommendations and guidance.

The research led by Adolfo Acevedo Vogl and Brenda Marvelli Alfaro Ortiz (Coordinadora Civil de Nicaragua, Nicaragua) introduces a new dimension of the topic. Nicaragua has not signed any DTAs with any country in the world.This fact leads to the analysis of whether or not it is convenient for the country to join the DTA network, with conclusions being revealed throughout the research. After examining the role of DTAs in economic and legal relations at a global scale, the authors analyze the changes to the Nicaraguan taxation system aimed at creating a more progressive fiscal system.

This chapter shows different approaches to the same issue. On the one hand,it provides a historical account of DTAs and the list of countries with which such agreements remain eff ective. On the other hand, it specifi es the various methods used to enforce the agreements. Finally, it examines the controversial agreement with the USA and off ers a set of important recommendations.

The chapter on Uruguay completes this important set of proposals and questions put forward by civil society. In its fi rst pages, the chapter walks us through the country’s historical evolution in terms of fi nancial liberalization and market deregulation. In this regard, a section is included on the liberal treatment of capital and investment. Also, the Uruguayan tax system is examined along with the DTAs signed by Uruguay, and a set of public policy recommendations is provided.