In June 2012, the Cypriot government requested a bailout after its two largest banks took massive losses-around 1.6 billion euros-on Greek government bond write-downs. In order to remain solvent, it was determined that Cyprus needed 17 billion euros in assistance. What Cypriots got was a government claim on their own private bank accounts.

The ultimate terms of the Cyprus bailout reveal the ongoing problems in the European Union (EU), where differing political agendas have undermined the cohesion of the system as a whole. Policymakers have neglected to consider-or simply do not care about-the lasting negative consequences the terms of the bailout will have on Cypriot citizens for the foreseeable future, to say nothing of their implications for the EU itself.

There is no doubt that Cyprus suffers from a vastly oversized financial system; its banking debt at the end of 2010 was around nine times its total GDP. With double taxation treaties and low corporate tax rates, Cyprus has long served as an offshore haven for foreign countries, especially Russia. According to Mark Galeotti, a professor at New York University, Cyprus has “been the den for all kinds of dirty money, criminal money, but also money just avoiding tax in Russia.” The blame for most of Cyprus’ financial woes can therefore be placed on the country’s own offshore-friendly policies, as well as the risky behavior of its creditors.

Yet the terms of the bailout have more to do with the agendas of the powerful eurozone members than with the financial situation in Cyprus.

It didn’t have to be this way. Last summer, European Central Bank President Mario Draught vowed “to do whatever it takes” to save the euro. Following this 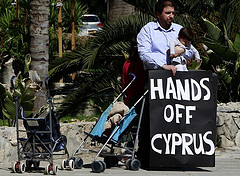 speech, the European Central Bank (ECB) Governing Council committed to buying up large quantities of indebted governments’ bonds in return for the states agreeing to strict conditions to stabilize their finances. This move bought the EU some much needed time; with this additional security, investors were willing to accept lower yields on their bonds.

The next step should have been to focus on programs that would stimulate continent-wide growth. Instead, countries such as Germany, under the leadership of Chancellor Angela Merkel, balked at any proposition that could be construed as letting debtor countries off the hook. When considering the Cyprus bailout, Germany was eager to avoid the mistakes it believed it had made in Greece, where eurozone countries had lent Athens more money than it could ever repay, forcing private bondholders to take losses on Greek debt. Even worse from a German perspective was that some debt was written off. After this, Germany began to insist that debtor countries take greater responsibility for their finances. Governments in the Netherlands, Finland, and Austria agreed.

According to conditions set by the ECB, since all three major ratings agencies downgraded Cyprus’ credit rating, its government debt was no longer eligible as collateral for borrowing from the eurosystem. Unlike Greece, Portugal, and Ireland, the ECB did not grant Cyprus an exemption. This ultimately forced Cyprus to negotiate a bailout package with the so-called Troika of the European Commission, the ECB, and the International Monetary Fund (IMF). Cyprus appealed to Russia for support, but none was forthcoming.

In the end, the Troika and Cyprus agreed on a 17-billion-euro bailout package. The bailout follows the solution prescribed by the IMF and supported by Germany, where Cyprus is held responsible for coming up with 7 billion euros from its own finances. Of the 10 billion that makes up the bailout component, 1 billion will be contributed by the IMF, and the additional 9 billion will come from the other 16 eurozone countries.

Raising the Funds-and the Stakes

Obviously, raising the necessary funds put Cyprus in an extremely tight situation. Following two weeks of negotiations-during which time Cypriot banks were shut down-Cyprus’ government agreed to seize billions of euros from private bank accounts holding more than the insured limit of 100,000. Strict capital controls-the first of their kind in the EU-were subsequently introduced to prevent Cypriots from emptying their accounts.

Initially it appeared that a one-off 9.9-percent levy would be imposed on all deposits over 100,000, and a 6.75-percent levy on deposits below it. Instead, Laiki-the country’s second-largest bank-is to be split up, with its healthy assets absorbed into the Bank of Cyprus. Depositors in Laiki could face losses anywhere between 60 and 77.5 percent of their uninsured savings.

According to the current plan, the Bank of Cyprus will then be restructured by writing down bonds and turning uninsured deposits over the 100,000 threshold into equity. These deposits will be frozen until the remaining bank’s recapitalization needs are determined, and if the bank does well, they could be sold back in the future. However, most experts agree that this is unlikely. So Bank of Cyprus depositors could face losses as high as 40 percent.

When news of capital controls and deposit seizures first broke through in a leaked decree to the Greek newspaper Kathimerini, hundreds of Cypriots responded by taking to the streets to protest. They gathered outside the presidential palace chanting, “I’ll pay nothing, I owe nothing.” Merkel was a particular target of protestors, many of whom waved banners of the German chancellor dressed up like a Nazi.

Cyprus is additionally expected to liquidate up to 75 percent of its gold reserves to meet its obligations under the bailout.

With Cyprus’ two major industries being banking and tourism, original projections of an economic slump of 3 percent are now seen as overly optimistic, with most economists expecting a decline between 5 and 10 percent. Even worse, Fiona Mullen from Sapienta Economics says that unemployment is heading for 17 percent this year, and could exceed 25 percent in 2014. The situation is so dire that economists like Paul Krugman have even advised Cyprus to leave the eurozone, a radical if unlikely suggestion.

Despite Cyprus’ small size, the implications of this deal, if approved, could have serious consequences for the eurozone. If Cyprus can grab depositors’ money, what would happen if a much larger economy-say, Spain or Italy-were forced to seek a bailout? Most economists agree that bank runs in either of these countries would be fatal for the eurozone, and indeed ECB president Mario Draghi has insisted that Cyprus’s bailout is "no template" for other potential bailouts.

But meanwhile, tiny Cyprus is left to suffer the bane of austerity. Lacking support from both their own government and the European Union, Cypriots will be forced to suffer for the mistakes of a few powerful members of the financial sector. As Charalambos Alexandrou, an average roofer trying to make a living, emphasized to the New York Times, “Not everyone here is Russian, or making money illegally, or laundering money...most of us are normal people living normal lives.”

With many young and well educated Cypriots now beginning to leave to leave the island, it seems unlikely that Cyprus will recover from this so-called “bailout” anytime soon.