Mobilisations that began Friday, February 11th, throughout the country continue on Saturday, on the second day of a general strike with the participation of both the public and private sector. The two larger umbrella unions, GSEE and ADEDY, held protests on Saturday morning in Syntagma Square. Streets in downtown Athens were closed during the day due to the protests.

These citizens’ mobilisations will culminate on Sunday - the day when the new bill is voted in Parliament. GSEE and ADEDY are planning a rally at 17:00 in Syntagma, while Communist Party (KKE) affiliated union, PAME, will hold a rally in Omonia Square at the same time.

According to news web site in.gr, over 5,000 policemen have been placed in the Athens centre for the weekend.

A campaign to inform citizens was held on Saturday by PAME. Additionally, members of the communist party on Saturday morning crossed the fence and climbed on the Acropolis in order to hang two banners, one in Greek and the other in English, with the slogan "Down with the dictatorship of the monopolies of the European Union."

Besides the country’s two largest umbrella unions, the Greek Seamen’s Federation was also on strike on Saturday and ships remained bound for a second day as a result, while hospital doctors will also participate in rallies held in major cities, as will dentists in Thessaloniki and bank personnel.

Furthermore, a three-day nationwide abstention was decided by the presidents of the country’s Bar Associations for Monday, Tuesday and Wednesday 13-15 February. 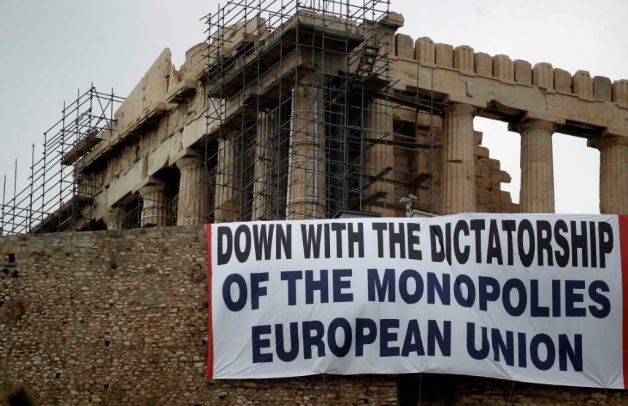