The president of Iceland blocked a hard-fought $5 billion compensation deal with the British and Dutch governments on Tuesday, upending the precarious finances and politics of the island nation and further jeopardizing already frayed ties with Europe and international lenders.

In a televised speech, President Olafur R. Grimsson said he would veto legislation under which Iceland was to repay the British and Dutch governments for funds they used compensate depositors of a recently collapsed Icelandic bank in their countries, The New York Times’s Landon Thomas Jr. and David Jolly report.

His decision means the bill will be submitted to a referendum in a country where recent polls show that 70 percent of the population is opposed to the bill. Its rejection would force Iceland’s increasingly precarious left-wing coalition to reopen negotiations with the British and Dutch governments - both of which have taken a hard negotiating stance. 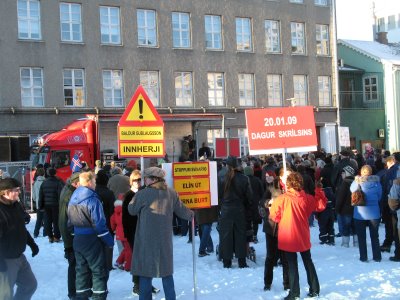 The presidential rebuke is being described as one of the more momentous decisions in recent Icelandic history. But it also highlights a widening fault line between struggling European governments, pressed by impatient bond investors, ratings agencies and the International Monetary Fund to impose budget cuts and shrink deficits, and their recession-battered citizenry. Some 60,000 people in Iceland - one-fifth of the population - signed a petition against the bill, which was presented to the president last week.

Late last month, the constitutional court in Latvia vetoed a move by the government there to cut pensions to keep in tune with an I.M.F.-sponsored austerity package - a development that threatens the I.M.F. agreement and the country’s ties with foreign creditors.

Governments in Ireland, Greece and even Britain are also threading the increasingly difficult needle of satisfying bond investors as well as voters.

In a country that was driven to default by the speculative overseas excesses of its banks, doubt and suspicion over the motivations of outsiders has been awkwardly balanced by a grudging recognition that Iceland is obliged to repay Britain and the Netherlands for bailing out depositors there in Icesave, the Internet unit of Landsbanki, which collapsed in late 2008 along with the rest of Iceland’s banking sector.

The savings of Icelandic citizens were protected by an unlimited domestic deposit guarantee.

In a statement, the British treasury - which along with its Dutch counterpart pushed Iceland to amend a previous bill, making it tougher on Iceland - said that the “government expects Iceland to live up to its obligations.”

But sotto voce, British government officials were also casting doubt on what would happen next. Iceland has never held a referendum and there is scant language in its constitution explaining how one would be carried out.

Iceland’s prime minister, Johanna Sigurdardottir, told reporters in Rekyjavik that Iceland would have its referendum and that “Iceland honors its international obligations.”

Any backroom dealings between Iceland and its lenders, though, is likely to be received with even more anger by emboldened Icelanders.

Emotions remain raw over Britain’s invoking of anti-terror laws in its initial response to the failure of Icelandic banks, and there is a strong feeling in Iceland that the bargain to repay the depositors of Icesave is nothing but large nations ganging up on a small one.

“The U.K. and the Dutch have been pushing too hard and they have been using the I.M.F. to pressure Iceland,” said Ogmundur Jonasson, once a health minister in the current government, who resigned recently over the Icesave bill. “I am hoping now that they will respect democracy and understand that one has to listen to what the people say.”

Iceland reached an agreement with Britain and the Netherlands last June to repay those governments for loans they used to repay the first €20,887, or about $30,000, lost in each bank account - the minimum they say Iceland is required by treaty to pay. The outlines of that deal appear to remain in force.

But amendments added to the bill as it made its way through Parliament - including one that said repayments would not be made if gross domestic product fell below a certain level - had angered officials in London and Amsterdam.

The bill passed by the Icelandic Parliament on Dec. 30 removed some of those conditions, but the president said the matter was not for politicians to decide, as “the nation is the highest judge for the validity of law.”

Icelandic banks were aggressive investors in Northern Europe, luring depositors with high rates. But short-term financing for the highly leveraged institutions dried up when the credit crisis hit with full force.

The government in October 2008 nationalized the country’s three biggest banks, Glitnir, Kaupthing and Landsbanki. Those banks failed with more than $60 billion owed to creditors overseas.

The friction has complicated the country’s efforts to regain access to international lending to rebuild its economy, which shrank at an annual 7.2 percent rate in the third quarter.

And with further I.M.F. aid dependent on a final resolution to the Icesave matter, fears are growing that the country might tilt towards insolvency.

“By pushing so hard, the British and the Dutch might push Iceland into bankruptcy and get no money back at all,” said Jon Danielsson, an expert on the Icelandic economy at the London School of Economics. “Without the deal, the government is facing a debt burden of 140 percent of G.D.P. With the deal it goes to 200 percent, giving Iceland one of the highest debt burdens in the world.”