Ireland: The socialist solution to the crisis

We need ‘a great national effort’ says Brian Lenihan. We need a ‘national consensus’ says John Gormley, the pathetic Green leader. We need a ‘national government’ to end ‘raucous debates’ in the Dail, says one-time President of Limerick University, Ed Walsh. Whenever there is a lot of profit and wealth for the rich, there are no calls for a national consensus. During the Celtic Tiger years, selfishness and inequality were celebrated and we were told to admire our entrepreneurs.

But as the crash deepens, suddenly ‘WE’ are all supposed to pull together. It is a total sham and Eamon Gilmore was absolutely right to reject it saying that: “All of this talk about national consensus is really about keeping Fianna Fail in government”. The most positive thing ‘We’ - that is, the working people - can do is to drive them out of office. We need a national strike, a ‘warning strike’, before the budget so that they get the message. The next budget, according to Eamon O Cuiv, is likely to contain cuts of €4.3 billion. Extra income tax will be levied on the low paid; child benefit will be attacked; water charges are on the way and even deeper cuts will destroy what is left of the health service. 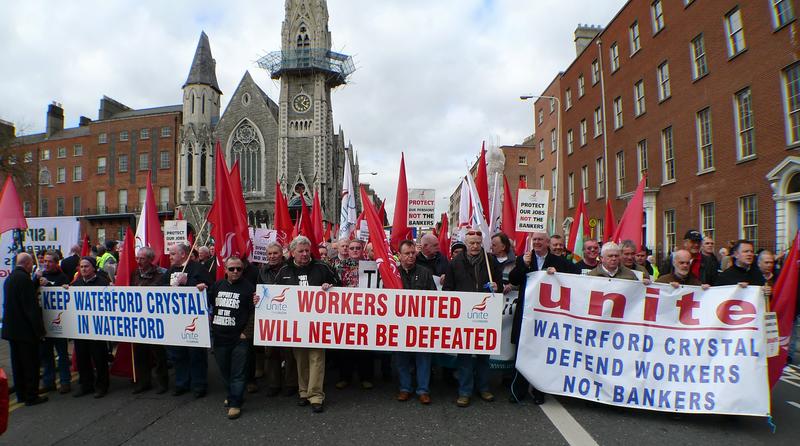 These cuts will only throw the country back into an even deeper recession - putting ever greater numbers of people onto the dole. All of which begs the question: What is the alternative? And here there is a big problem. While Gilmore rightly condemns the idea of a national government, he too, accepts that cuts of at least €3 billion must be made. The Labour Party joined with the right-wing parties in supporting the Lisbon Treaty - and they want to stick to its rules about government deficits too.

The real left alternative to this economic madness will therefore not come from Labour Party Only the radical left is advocating a strategy to make the foreign and native rich pay for the crisis they created. Such measures should include:

1. Stop the bank Bail Out - Create a good state bank to organise credit for society. If there is no €50 billion bail-out for private banks, they will go bankrupt. But the huge debts that they accrued from foreign bondholders will also follow them. Currently, Irish banks owe foreign banks €168 billion - and have no prospect of paying without state help. Instead of socialising their debt, we should let the banks and their bondholders suffer. There should then be emergency legislation to create a good state bank and transfer all deposits and mortgage payments to this state bank.

2. Stop pampering the Rich - Take their assets. Bernard McNamara, the property developer, who has huge debts, transferred his assets to his wife in September 2009. Other rich people have moved their money to Switzerland. Still others, such the John Ronan of Treasury Holdings, is charging the Irish state huge sums for ‘managing’ the National Convention Centre - even while owing millions to NAMA. This pampering must stop and the rich should be treated the same as social welfare recipients. They should be made to make a full declaration of all their assets under penalty of imprisonment. These assets should then be taken to pay for their debts; and it does not matter which family member holds them.

4. Impose a wealth levy to raise new funds. There are €320 billion in assets held by the top 5 per cent in 2007. Even if that has now shrunk to €250 billion, a 2 per cent annual assets tax on the top 5 per cent of asset holders would bring in €5 billion per year.

5. Tell the EU we will not meet their targets on government borrowing - and will save society instead. Two of the largest bondholders for Irish state debt are Bank of Ireland and AIB (See table). Why should we pay back these bondholders when they also want handouts from the Irish state?

6. With all this money saved, create a public works programme to give jobs. The Irish capitalist class have stopped investing in this country and capital investment has fallen by over 50% in two years. The multi-nationals are already starting to flee to other countries which offer cheap wages and low taxes. The only way that real jobs can be created is through a public investment programme.

If you agree with this Left economic programme and want to get copies to take around your friends, contact Socialist Worker on info@swp.ie