Over 110 billion US dollars seems to have ‘disappeared’ in over and under pricing on import of crude oil in the European Union and the USA between 2000 and 2010. How did that happen?

Transfer pricing is one of the most usual techniques that extractive industries can use to transfer profits from the source country and to the company itself. Today, over 60% of world trade is taking place within transnational companies, such as the extractive industries. The OECD suggests that companies should keep arm’s length prices; as if they traded with a company outside the company structure itself. But do they do this? And does this guiding principle work?

In the Piping Profits report we showed that ten of the world’s most powerful extracive companies operate with at least 6038 subsidiaries, whereof 2038 are incorporated in secrecy jurisdictions. National tax authorities generally do not have sufficient access to essential information needed to test if the arm’s length principle is properly used and reported by the companies (outside their own jurisdiction). When tax authorities do not have access to vital, sufficient and accurate information to know if the pricing was right, which is crucial to calculate the tax, how can they know that their tax base is right? Tax administrations in developing countries seldom have the capacity or the ability to even try to find out.

Extractive industry generates enormous profits. Transfer pricing in the extractive industry will have a significant impact on a country’s tax base. Transfer-pricing rules are a complex and challenging tax area in international trade and perhaps the most important tax matters in global trade today. Companies often use lawyers to structure their transactions. Lawyers’ legal privilige means that they do not have to disclose what they have done if they have contributed to shifting profits out of a source country. Lawyers are also tasked with presenting complex legal issues to hinder those seeking insight. Secrecy in the extractive industries should not be tolerated when companies hide profits from tax from those they are supposed to manage the resource on behalf of.

Trade with crude oil is one of the most central aspects of extractive industries. In addition to this, companies can also shift profits through complex financial instruments, which are not directly linked to the physical crude oil, such as derivatives. The value creation from extractive industries should be used to create opportunities for the 2/3 of the poorest people in the world, who paradoxically live in the most resource rich countries in the world. This is particularly harmful for developing countries, but the same mechanisms affect all countries. In a time of financial crisis in Europe and the USA it may be interesting for governments to do something about this.

PWYP Norway has proposed one very simple and effective reporting mechanism called ‘An extended country by country reporting standard for the extractive industries’. This is a reporting standard in line with how companies themselves are consolidating their accounts. It will not directly target transfer pricing, but it will be the place of choice when investors and other constituencies seek insight into the use of their resources. Investors can follow their money, and governments can then get valuable and standardised information, across all jurisdictions where the companies operate.

click on this link to read the full report 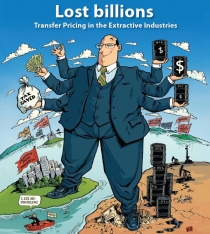