Although Thailand officially encountered the crisis in July 1997 after the government announced the switch from fixed exchange rate to floating exchange rate, it suffered from economic downturn long before July 1997. Many financial institutions which became bigger and bigger, and perhaps too big, during the boom of the economy in the early 1990s faced several problems such as tremendously high numbers of NPLs due to over-lending during the peak 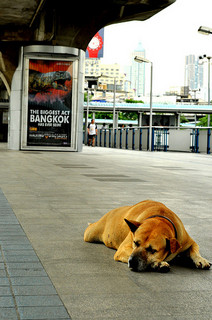 Looking at the budget side, the story was pretty much similar to the debt side. In 1997 and 1998, the government had to keep 2.6% and 3.8% of the total budget to service public debts, because, during the time, public debts increased very high. So the government had to pay back these debts as much as possible to prevent the threat of higher public debts. But, after that, in 1999, 2002, 2001, or even 2002, the proportion of total debt in GDP was quite stable; this was because the government saw that the threat of a rapid increase of public debts had been relieved and there was no tendency of higher proportion of debts in GDP. Therefore, it would be better for the whole country as the government transferred a part of the budget to heal the economy from the crisis.

After 2001, it seemed that the economy picked up from the crisis and it grew again at a certain pace. The higher economic growth, implying not only higher tax revenue and higher budget but also lower necessity for the government to intervene the economy, enabled the government to service its debts at a faster pace. Plus, as GDP is the denominator, higher GDP means a lower ratio of public debts to GDP. Therefore, Thailand, had lower and lower the ratio of debts to GDP from 2001 to 2008.

It is important also to note that after 2001, the ratio of external debt over GDP has been lower and lower, because the attempt to reduce external debts has been a common national policy that the country learned from the crisis. Really, most Thai people have believed that borrowing money from aboard is pretty much similar to being colonized by foreigners, because rules and regulations decrease independence of issuing policies. Therefore, when the economy picked up from the slump, there has been a policy to reduce the amount of external debts. As a result of this policy, external debts have turned lower and lower. Even during the global current crisis, the government has financed its spending by issuing new lots of government bonds that are valued in the form of the Baht.

Lastly, to continue from the above paragraph regarding the current crisis, as the government issued a lot of government bonds, total remaining debts increased almost 600,000 million Baht within just one year in 2009. In addition, the country encountered negative GDP growth, so the ratio of total debt on GDP increases up to 44%.