The long depression in Italy

The long depression in Italy

Italy has a referendum this coming weekend. Italy’s Blairite (Clintonesque) prime minister Matteo Renzi of the ruling the centre-left Democrats called a referendum, British Cameron-style, to ‘reform’ the electoral constitution. He wants to reduce the size of the upper house of parliament, the Senate, from over 350 senators to just 100 and also have them come from the regions and cities, namely the elected mayors etc. Most important, he wants to end the ability of the Senate to send back policies or measures passed by the lower house assembly (elected by popular vote in proportional representation – i.e. seats according to the share of the vote). Thus, the Senate could no longer go on with ‘ping-ponging’ tactics back and forth with the lower assembly.

Renzi has staked his political reputation and his position as PM on winning this vote, like David Cameron did in the UK over the Brexit referendum. And, according to the opinion polls, he looks as though he is heading for the same defeat as Cameron, throwing another major capitalist state into confusion, uncertainty and paralysis.

But it is all relative – after all, Italian politics and the economy have been in a state of paralysis for decades, with the situation only worsening since the end of the Great Recession. Italy is now in a Long Depression that it seems unable to escape from. 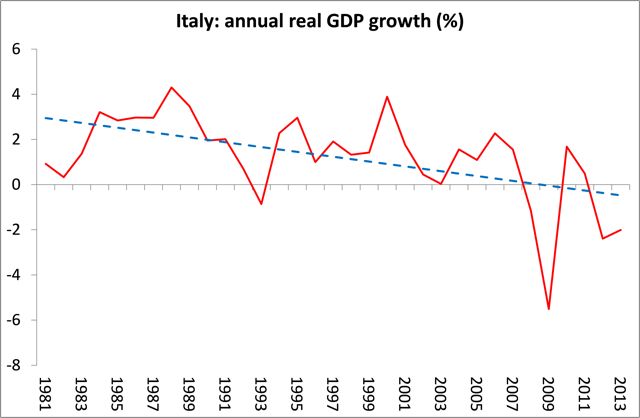 The immediate problem is Italy’s banks. Europe’s banks currently hold €1trn of what are called ‘non-performing loans’, loans that the borrowers are no longer paying interest on and could be about to default on. Of that €1trn, around one-third is held by Italy’s banks. These bad debts are like a millstone around the necks of Italy’s finance sector. The myriad of small Italian regional and large national banks have been lending to small businesses and property companies. But thousands of these small companies are bust and cannot pay back their debts as the economy stagnates.

As I said in my book, The Long Depression, (Chapter 9) in some ways, Italy is in the most dire position of the top seven capitalist economies. Italian capital was in the doldrums before the Great Recession. Profitability has been falling since 2000 and is now down 30% since 2004. Net investment has dried up and productivity of labour is not just growing slowly, as it is in other major economies, it is contracting outright. Italy cannot recover because the Long Depression in Europe continues. 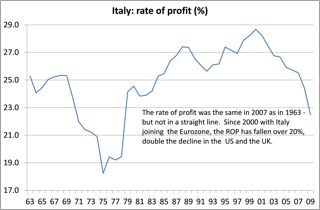 And as a result, its banks are close to bankruptcy. Banking analysts reckon that up to eight banks, led by Italy’s third largest and oldest, the infamous Monte Pachi, risk failing if Renzi loses the referendum. That’s because potential investors in these banks, badly needed to recapitalise them if they write off these huge bad debts, won’t cough up.

I made some simple estimates of the likely losses that the Italian banks face (based on the Bank of Italy’s recent financial review). The banks have lent up to now €2trn to Italians businesses and households. About €330bn of these loans are ‘bad’ (i.e. won’t be paid back). That’s about 20% of Italy’s GDP. The banks have built up reserves to cover these potential losses of about €150bn and they could expect to sell off some of assets of bust businesses over time. Even so, there would still be a potential loss of about €100bn on the banks’ books if they grasped the nettle and ‘wrote off’ these bad loans. That would completely wipe out the value of the shares of the investors in many of these banks. For example, the hit to Monte Paschi would be nine times more than the bank is worth on the stock market right now. And Italy’s largest, Unicredit, which is supposed to helping the other smaller bust banks like Banco Veneto, would also be wiped out. Indeed, Unicredit wants to raise €13bn for itself to shore it up.

I reckon that a bailout of the banks would cost at least €40bn, just to put the larger banks back on their feet. Where is such a bailout to come from? The Renzi government set up a special fund called Atlante, which was funded by the other larger banks, with a little from the state savings bank. This raised just €4bn, most of which has already been spent on Monte Paschi to no avail. But that is not the worst of it. Under the new EU banking bailout rules, insisted on by Germany, state money cannot be used to bail out the banks. The bank shareholders and bond holders must take the hit – at least first.

That sounds okay, you might say. Let the bank shareholders pay. But here is the rub. The Italian banks have been engaged in crude mis-selling to all their customers with their savings. Customers were encouraged to ‘save’ by buying the bank’s own bonds – in other words lending to the bank itself. So hundreds of thousands of older (not so wealthy) people would now lose all their savings if the banks write off their bad debts and ‘recapitalise’ by writing down their own borrowings (bonds to zero). This would be political dynamite, apart from causing misery to hundreds of thousands – and it has already happened to ‘savers’ with Banco Veneto and Monte Paschi.

Renzi has been pressing the Germans and EU leaders to relax the rules and allow state funds (ideally European ‘stability’ funds, which are available) to bail out his banks. But the Germans are stubbornly holding to the rules, particularly as bailing out the Italians, after the Greeks, is anathema in Germany and fuel to fire to the Eurosceptics in the upcoming German election in 2017.

So if the vote goes against Renzi on Sunday, international and Italian investors are going to be very reluctant to stomp up funds to Italian banks when they fear the Italian government will fall and possibly be replaced in an early general election by the populist Five Star alliance, which has already won mayor’s positions in Rome and Turin and is leading in the opinion polls. Could there be a ‘populist’ leading Italy out of control of the elite, and this time not Berlusconi? At best, there will be a government unable to act through parliament to implement ‘reforms’ in the interest of capital, namely reducing labour rights; more privatisation and government spending cuts.

It’s possible that Renzi will win the vote against all the expectations as ‘no’ voters don’t bother to turn out. Even if he does, the problem of the banks won’t go away. And the problem of the banks is merely a symptom of the failure of Italian capitalism and the paralysis of its political elite. Italy remains deep in depression and we have not even had a new slump yet.