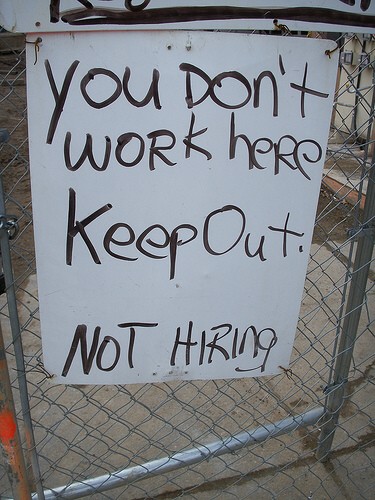 Millions of workers have lost their jobs in the current recession. Employment is down 12% in manufacturing, 7% in professional and business services, and more than 5% overall in the private sector compared to last year. Over 5.6 million people have lost their jobs since last June. The ranks of the unemployed are continuing to grow; the unemployment rate in June hit 9.5%. Good thing that unemployment insurance provides income to help tide these workers over this rough patch, right? Not so fast.

The share of unemployed workers receiving benefits has gradually shrunk since the 1970s. In 1975, over half of unemployed workers received regular benefits. But in 2008, only 37% of the unemployed did; in some states the figure was less than 25%. And so-called “discouraged workers,” those who want but are not actively seeking employment, are not considered part of the labor force and so are not even included in these figures.

Unemployment insurance, in short, is not a benefit that everyone who loses a job can count on. Several groups are working to change this. The American Recovery and Reinvestment Act (ARRA), better know as the Obama stimulus package, provides temporary funding for states that expand their unemployment coverage, and so far this year 25 states have done so. Others, however, are resisting even a temporary expansion of coverage that would be fully federally funded.

When unemployment insurance was established as a nationwide program in 1935, it was hailed as a means of enabling workers to protect their standard of living between jobs. With it, workers are better able to keep their homes and their health. It helps to stabilize family well-being and maintain the labor force in a region. By enabling workers to engage in longer job searches, unemployment compensation also improves workers’ job choices. It even enhances employers’ flexibility in hiring by making lay-offs less painful.

Unemployment insurance is also an important countercyclical tool: it bolsters consumer spending during economic downturns and then automatically drops off as the economy recovers and unemployment falls. Because it reduces the need for other forms of government intervention to raise demand in a downturn, the program has supporters across the ideological spectrum.

Coverage and benefits vary by state. The average weekly benefit in 2008 was $300-about 35% of the average weekly wage. Benefits are paid from state funds that are financed by a payroll tax on employers. This tax is levied on anywhere from the first $7,000 to the first $35,300 of each worker’s annual earnings depending on the state; the national average is $11,482. The tax rate ranges from 0.83% to 5% of the taxable portion of wages, with a national average of 2.42%. (Who bears the cost of this tax is debated: economists have shown that whether or not a company is able to pass the cost of payroll taxes forward to customers or back to employees depends on conditions in its particular product and labor markets.)

Shifts in employment patterns and a tightening of eligibility requirements are behind the nationwide reduction in effective unemployment insurance coverage. Today almost 30% of the U.S. work force is employed in nonstandard work arrangements, including part-time, temporary, contract or on-call work, and self-employment. Most of these jobs are subject to the payroll tax that funds unemployment benefits-yet these workers often find they are ineligible. For instance, persons who are seeking only part-time employment do not qualify for unemployment benefits in many states. This affects women in particular, including heads of households, who often work part time due to dependent care responsibilities. People who work full time but only for part of the year may also find it difficult to qualify for unemployment benefits.

Many workers who are not eligible for benefits provide income that is critical to their families. In 2007, 41% of workers worked only part-time or part-year. Among heads of households, this figure, though lower, was still sizeable: in 2007, it was 32% overall and 42% for female family heads. Besides child care, elder care can also mean part-time or part-year work for many. Nearly one-third of working adults with older parents report missing some work to care for them.

Who Are the Unemployed?

Certain industries, regions, and workers are being hit harder than others this recession. In June, 15 states and the District of Columbia had unemployment rates of over 10%, but only one, North Dakota, had an unemployment rate below 5%. Michigan, Oregon, South Carolina and Rhode Island all had seasonally adjusted jobless rates of 12% or more.

Unemployment hits some population groups much harder than others-young people, people of color, and anyone with relatively few years of education. Among workers over 20 years of age, black men had the highest jobless rate in June at 16.4%. The rate for Hispanic women was 11.5%, for black women 11.3%, and for Hispanic men 10.7%. In contrast, the jobless rate was under 10% for both white men (9.2%) and white women (6.8%).

A combination of factors including occupational segregation, lower educational levels, and discrimination result in lower incomes for women and for black and Latino men, exacerbating the impact of higher unemployment. Data from 2005-2007 show that black women working year-round, full-time earned $15,900 a year less than white men; for Hispanic women the wage gap was $21,400.

Lower-income families have fewer assets to see them through rough economic times, and their extended families are also hard-pressed as demands upon them increase. Nonprofits, another part of the social safety net, suffer from increased demand for services and decreased donations during recession. As a result, families of blacks, women and Hispanics suffer severe setbacks during a period of recession, and unemployment insurance can be especially critical to them.

Families in which one or more wage earners lose their jobs bear costs greater than just the lost wages. Savings are exhausted; rates of illness, both mental and physical, increase; debt levels often rise (inadequate medical insurance coverage is a major factor-in 2008, 60% of the unemployed lacked health insurance); and the pursuit of a college education or other training may be postponed. Studies have documen-ted a rise in suicide rates, mental and physical illnesses, and domestic and other violence among the unemployed. These problems become widespread during recessions and become a burden on society, not just on individual families.

Under the Obama stimulus package, states that elect to expand their programs in certain ways receive federal funds to finance these changes for at least two to three years. States can make unemployment benefits more available in a number of ways:

* Changing the base period used to determine whether a worker qualifies for benefits and if so, the amount he or she will receive.

* Making unemployment insurance available to certain individuals who are seeking only part-time work and/or to those who lost or left their jobs due to certain compelling family reasons (for example, domestic violence or a spouse relocating).

* Providing an additional 26 weeks of compensation to workers who have exhausted regular unemployment benefits and are enrolled in and making satisfactory progress in certain training programs.

* Paying an additional dependents’ allowance of at least $15 per dependent per week to eligible beneficiaries.

Another potential reform relates to the extension of benefits beyond the regular 13- to 26-week period. States are required to offer extended benefits during periods of especially high unemployment (with half the cost covered by the federal government) only if certain trigger requirements are met-and that does not happen often. The ARRA offers states the option of adopting a new, less stringent trigger requirement. As of mid-July, 29 of the 30 states adopting the new trigger requirements have had extended benefits go into effect, compared with only six of the 20 states that have kept earlier triggers. Last year Congress authorized a separate program, Emergency Unemployment Compensation, to provide federally funded benefits after regular benefits are exhausted. The National Employment Law Project estimated that about 1.2 million workers would exhaust their benefits under this program before July 2009 and so become eligible for extended benefits.

A permanent expansion of coverage to a larger share of the unemployed, with or without an increase in benefit levels, would cost more than the average $23 per month in unemployment insurance taxes currently paid per worker. This gap could be filled by expanding the portion of wages on which the tax is levied. To reduce the negative impact on low-income workers, this could be accompanied by adjustments to the earned income tax credit.

Even if the reforms contained in the Obama administration’s stimulus package were fully enacted, benefits and coverage would be low in the United States in comparison to Europe. Much remains to be done to ensure minimal income security here. As the unemployment rate approaches 10%, it is time to revamp our broken system.

Marianne Hill, Ph.D., has published articles in the Journal of Human Development, Feminist Economics, and other economics journals. She also writes for the American Forum and the Mississippi Forum.