What everyone should know about the "debt crisis" in the U.S.

Since the U.S. "Debt Crisis" has been a big international story for the last few weeks, it is worth clarifying what is real and what is not. First, the U.S. government does not have a "debt crisis." The U.S. government is paying net interest of just 1.4 percent of GDP [http://www.cbo.gov/doc.cfm?index=12212] on its public debt - this is not much by any historical or international comparison. The relatively large annual deficit at present (9.3 percent of GDP) is overwhelmingly the result of the recession and weak recovery. The long-term deficit projections are driven by health care costs [http://www.cepr.net/calculators/hc/hc-calculator.html] in the private sector. These spill over into public spending because the U.S. government pays for almost half of health care spending, at a rate that is twice as high as other developed countries - and rising fast. 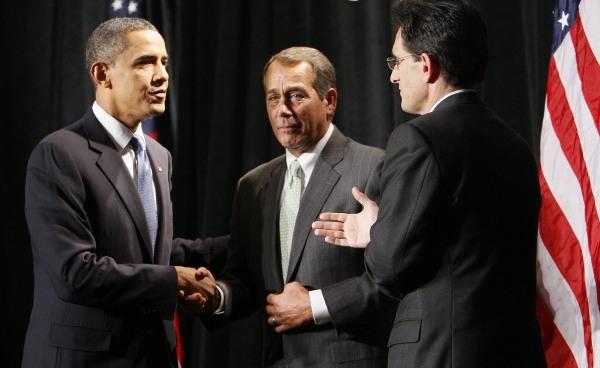 There was never any chance [http://www.cepr.net/index.php/op-eds-&-columns/op-eds-&-columns/will-the-us-credit-rating-be-downgraded-does-the-norwegian-lunatic-killer-like-americans] that the U.S. would actually default on its debt. The whole "crisis" was manufactured from the beginning, with Republicans in the House of Representatives using a technicality to win unpopular spending cuts that they could not win at the ballot box. It worked: they got an agreement that promises large spending cuts without any tax increases on America’s rich or super-rich, who have vastly increased their share of the national income over the past three decades.

The right won because President Obama chose to collaborate with them, also seeking to take advantage of the manufactured "crisis" to implement cuts that offended and hurt the people who voted for him. Of course he also wanted to increase taxes on the rich, but because he had accepted the legitimacy of the Republicans’ extortion, he lost that too.

The worst damage from this "weapon of mass distraction" - and President Obama’s capitulation to it — is that the policy debate in the United States has been sharply altered. The phony "debt crisis" is seen as the main problem; and even more absurdly, a cause of the economy’s weakness. The U.S. economy barely grew in the first half of this year, and we have 25 million people unemployed [http://www.bls.gov/news.release/empsit.t15.htm], involuntarily working part time, or having dropped out of the labor force. We are more than one-third of the way into a "lost decade," and the shift of the policy debate toward deficit reduction will increase the probability that we will experience the whole thing.

If President Obama loses both houses of Congress and/or the presidency in the next election, it will be the result of a weak economy and high unemployment, and because he let his opponents not only sabotage the economy - which they are all too happy to do - but also to redefine the economic debate so that the president and his party will get blamed for the mess.

So the next time someone complains that most of South America is governed by left-populist presidents who fight too much with their countries’ traditional elite, remember there are worse kinds of leadership: the kind that commit political suicide for the sake of "bipartisanship."

Mark is co-director of the Center for Economic and Policy Research http://www.cepr.net, in Washington, D.C He is also president of Just Foreign Policy [http://www.justforeignpolicy.org/].