Why Chavez’s legacy will live on

Hugo Chavez, who died last week, mourned by millions of Venezuelan citizens and people around the South American region, was a figure that was larger than life.

During his 14 years as President of Venezuela, he managed to institute profound changes with effects on his country and the developing world long after his death.

Some leaders and media outlets in the West have been giving misleading or trivialised commentaries, just as they tried to demonise him during his lifetime.

This is to be expected, since Chavez was felt by the establishment as a thorn in the flesh.

He had not minced words in criticising and acting against 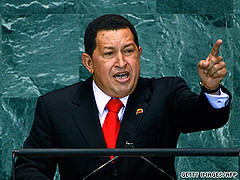 the so-called Washington Consensus, a nexus of policies and institutions (including the International Monetary Fund , the World Bank and the US Treasury) that promoted a version of free-market fundamentalism that adversely affected the economic and social life of the Latin American region.

Chavez’s greatest feat was to identify and break out from the straightjacket of the Washington Consensus and to formulate policies that were very different, which he believed would benefit the people, especially the poor.

One of the first things he did as President after being elected in 1998 with a large majority was to re-organise the national oil industry and to play a leading role in reviving OPEC, the organisation of oil exporting countries.

The hugely increased oil revenues was the basis for financing many innovative social programmes.

Known as “missions”, they included raising literacy and education levels, providing health care to the poor through thousands of doctors and health assistants in the communities and providing cheap food for the urban population through special supermarkets.

In the rural areas, there were separate “missions” to look after the peasants, resolve problems of mining communities, and meet the interests of indigenous peoples.

These well-documented social programmes and accompanying economic policies did much to improve the lot of the poor.

On the other hand, Venezuela still faces serious problems: an over-dependency on oil, high inflation and a high crime rate: in 2011 the homicide rate of 45 per 100,000 population compared with 25 twelve years earlier.

The pro-poor orientation and policies of the state were responsible for the strong support of the poor for Chavez. Their devotion to the President was evident in the outpouring of grief and the massive turnout of millions at his lying in state and his funeral.

To his critics, Chavez had simply used oil money to “bribe the poor” to vote for him.

But for Chavez and his colleagues in what they termed the “Bolivarian revolution”, re-orienting institutions and policies to benefit the poor was the main reason to be in government.

Chavez’s influence went far beyond Venezuela. His policies, and fiery rhetoric, set alight the imagination of social movements and the public in South America, and started an important trend. Following his ascent to power, several other leaders assumed political leadership in neighbouring countries who also bucked the ideology and policies of the Washington Consensus.

These included the more radical leaders of Bolivia and Ecuador and the more moderate and unorthodox leaders of Brazil, Argentina and Uruguay. The assumption to power of so many such leaders have broken the political sway of Washington and the economic spell of the Washington consensus in the region.

Chavez’s legacy may just be as important as a master builder of regional unity and integration. In his tribute to Chavez, the former Brazilian President, Luiz Inacio Lula da Silva, credited Chavez for his leadership role in the setting up of so many regional institutions in recent years.

They include the 2008 treaty that established the Union of South American Nations, the setting up in 2011 of the political forum of the Community of Latin American and Caribbean States (that does not include the United States and Canada as the OAS does) and the Bank of the South (a bank set up by South American countries, and which is independent of the World Bank and the Inter-American Development Bank).

“Of the many leaders I have met, few have believed so much in the unity of our continent and its diverse peoples — indigenous Indians, descendants of Europeans and Africans, recent immigrants - as he did,” said Lula of Chavez.

Chavez was also a believer and practitioner of broader South-South solidarity and cooperation. He used his country’s oil revenues to finance economic and social programmes in poorer neighbouring countries, from selling oil at below market prices to treatment for the blind.

His memory and grasp of issues and people were also phenomenal. When I approached him in the main aisle of the conference hall of the Copenhagen Climate Conference in December 2010, and introduced myself as director of the South Centre, he immediately recalled his knowledge of the Centre and his meeting with and admiration for Julius Nyerere, the former Tanzanian President, founding Chairman of the Centre and another towering pioneer of South-South cooperation.

Without hesitation or ceremony, Chavez invited me to visit Caracas and to organise a large conference to promote South-South solidarity. Alas, we were not able to make that proposed conference a reality before Chavez passed away.

Chavez lit up that Copenhagen conference by telling the thousand-strong audience, that included many heads of states and governments, of his disappointment with the rich countries for not doing enough to contain the climate crisis.

“They spend trillions of dollars bailing out the banks. If only the climate was a bank it would have been saved by now,” he said.

The straight talking and colourful Chavez will be missed; his legacy will live on.

Martin Khor is the Executive Director of the South Centre. .