Regulation does not work

Regulation does not work October 6, 2018

There is one big lesson from the Danske Bank money laundering scandal. Regulating the modern banking system does not work. Modern banks are now primarily giant hedge fund managers speculating on financial assets or they are conduits for tax avoidance havens for the top 1% and the multi-nationals.

The Danske Bank scandal is the latest and largest example of these modern banking activities. Over $235bn in ‘special transactions’ flowed through the bank’s tiny Estonian branch in just four years from 2012 – an amount that dwarfs the Baltic nation’s GDP. And this was in the period when international bank regulation had been tightened up, according to the IMF and the Bank for International Settlements, after the ‘reckless’ behaviour before the global financial crash.

Indeed, it was probably not just Danske Bank, but according to the Estonian central bank, the supposed regulator, Estonian banks handled about 900 billion euros, or $1.04 trillion in cross-border transactions between 2008 and 2015. The notion that these foreign individuals and investors would choose to run such a large sum of their money through Estonia for explicitly legitimate purposes is difficult to swallow. After all, this comes after the liquidation of ABLV, formerly the third largest bank in Latvia, after it was caught laundering money for North Korea.

John Horan, senior associate at Maze Investigation, Compliance and Training Ltd. in Belfast, says money laundering is a Europe-wide problem. “dark money will almost certainly continue to flow through the European banking system like sand through a sieve.” It’s a never-ending story.

Indeed, that’s not all. The very latest scandal concerns the siphoning of over $2bn of Danish tax revenues through a scam involving claiming back tax paid by foreigners on Danish shares. It appears that these foreigners never owned any sharesor paid tax on them and yet they were able to get ‘refunds’ through the connivance or negligence of Danish government employees and small European banks shifted the money – and nobody has been charged or resigned over this massive loss of taxpayer money – equivalent to $110bn in US tax revenues.

The regulators have been useless in stopping these criminal tax avoidance schemes by the banks. For example, Carol Sergeant was a regulator at the UK Financial Supervisory Authority and headed up supervision of the banks at the Bank of England. She got an honour from the Queen for “services to financial regulation”. She joined Lloyds Bank in 2010 and received bonuses which Lloyds are now asking back as she (among others) presided over the payment protection insurance (PPI) scandal for which Lloyds must pay now £18bn in compensation. But guess where she works now? Yes, it’s as non-executive director of Danske Bank, where her responsibilities include making sure that the bank operated under regulations!

Nevertheless, in its latest Global Financial Stability report, the IMF claims that “a decade after the global financial crisis, much progress has been made in reforming the global financial rulebook. The broad agenda set by the international community has given rise to new standards that have contributed to a more resilient financial system—one that is less leveraged, more liquid, and better supervised.”

Well, it may be true that international banks are better capitalised and less leveraged with bad debts after the gradual implementation of the Basel III capital and liquidity accords and the widespread adoption of ‘stress testing’, but even that can be disputed. In 85% of those 24 countries that experienced the banking crisis in 2007-8, national output growth today remains below its pre-crisis trend. And the IMF admits that “in many countries, systemic risks associated with new forms of shadow banking and market-based finance outside the prudential regulatory perimeter, such as asset managers, may be accumulating and could lead to renewed spillover effects on banks”.

The ‘official’ view that regulation is the only way to control the banks is accepted by most Keynesians or those who see the financial sector as the only enemy of labour. Take Nick Shaxson. Shaxson wrote a compelling book Treasure Islands, tax havens and the men who stole the world, that exposed the workings of all the global tax avoidance schemes and how banks promoted tax havens and tax avoidance for their rich clients.

And more recently, he has done a new piece of research that argues that not only does the City of London and the UK financial sector operate to help tax avoidance and money laundering, it does not provide credit for productive investment. Indeed, “research increasingly shows that all the money swirling around our oversized financial sector may actually be making us collectively poorer. As Britain’s economy has steadily become re-engineered towards serving finance, other parts of the economy have struggled to survive in its shadow.

Shaxson goes on: “Long ago, our oversized financial sector began turning away from supporting the creation of wealth, and towards extracting it from other parts of the economy. To achieve this, it shapes laws, rules, thinktanks and even our culture so that they support it. The outcomes include lower economic growth, steeper inequality, distorted markets, spreading crime, deeper corruption, the hollowing-out of alternative economic sectors and more.” So what are we to about these criminals at the centre of our economies, according to Shaxson? “We can tax, regulate and police our financial sector as we ought to.” So it’s regulation again – a policy that Danske and other scandals have proven not to work.

Then take Joseph Stiglitz, Nobel prize winner in economics, tireless campaigner against the finance sector and its iniquitous role, and (once again) adviser to the British Labour Party. Just after the global financial crash, Stiglitz wrote a book, Freefall, about the bursting of the housing bubble and the ensuing massive defaults on mortgages that triggered the financial meltdown of 2008–09. It was based on his study he had done for the UN, published as The Stiglitz Report, on the financial crisis, which declared: “Governments, deluded by market fundamentalism, forgot the lessons of both economic theory and historical experience which note that if the financial sector is to perform its critical role, there must be adequate regulation.”

Stiglitz proposed that future meltdowns could be prevented by empowering incorruptible regulators, who are smart enough to do the right thing. “[E]ffective regulation requires regulators who believe in it,” he wrote. “They should be chosen from among those who might be hurt by a failure of regulation, not from those who benefit from it.” Where can these impartial advisors be found? His answer: “Unions, nongovernmental organizations (NGOs), and universities.” But all the regulatory agencies that failed in 2008 and are failing now are already well staffed with economists boasting credentials of just this sort, yet they still managed to get things wrong.

In a 2011 book, Engineering the Financial Crisis: Systemic Risk and the Failure of Regulation, Jeffrey Friedman and Wladimir Kraus contested Stiglitz’s claim that regulations could have prevented the disaster, if implemented by the right people. Friedman and Kraus observe: “Virtually all decision-making personnel at the Federal Reserve, the FDIC, and so on, are . . . university-trained economists.” The authors argue that Stiglitz’s mistake is “consistently to downplay the possibility of human error—that is, to deny that human beings (or at least uncorrupt human beings such as himself) are fallible.” But note that Friedman and Kraus were no better in coming up with a solution. They argued for less regulation – free market style!

More recently, David Kane at the New Institute for Economic Thinking has shown that banks have managed to avoid most attempts to regulate them since the global crash as “the instruments assigned to this task are too weak to work for long. With the connivance of regulators, US megabanks are already re-establishing their ability to use dividends and stock buybacks to rebuild their leverage back to dangerous levels.”

Kane notes that “top regulators seem to believe that an important part of their job is to convince taxpayers that the next crash can be contained within the financial sector and won’t be allowed to hurt ordinary citizens in the ways that previous crises have.” But “these rosy claims are bullsh*t.” Kane wants criminal bankers locked up, not the banks just fined.

Regulatory reform since the global financial meltdown has not brought under control the criminal and reckless unproductive activities of modern banking. Even the IMF quietly admits this in its latest GFS report: “As the financial system continues to evolve and new threats to financial stability emerge, regulators and supervisors should remain attentive to risks… no regulatory framework can reduce the probability of a crisis to zero, so regulators need to remain humble. Recent developments documented in the chapter show that risks can migrate to new areas, and regulators and supervisors must remain vigilant to this evolution.”

Indeed! As Gabriel Zucman and Thomas Wright have shown in a meticulous and in-depth analysis of the size and extent of tax havens and tax avoidance, far from them being reduced or controlled, on the contrary, such schemes are an increasing part of US corporate profits, organised and transacted by the banks.

About half of all the foreign profits of US multinationals are booked in tax havens with Ireland topping the charts as the favourite (Irish tax rate just 5.7%). And the benefits for the increase in profits have gone to shareholders, the Zucman and Wright showed. “Ireland solidifies its position as the #1 tax haven,” Zucman said on Twitter. “US firms book more profits in Ireland than in China, Japan, Germany, France & Mexico combined.” 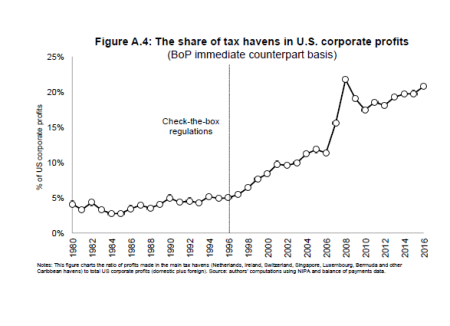 Zucman and Wright also show that the rate of return (or profit) on US multi-national investments abroad has not risen, indeed the rate has slipped. But thanks to favourable tax regimes (including the latest Trump measures) and the availability of tax havens like Ireland, after-tax profitability has jumped. 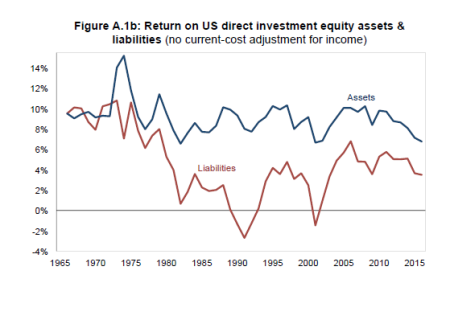 So those who think that ‘regulating’ the banks and tax evasion using ‘regulators’ will work are expecting pigs to rev up their jet engines for flight.

I have posted before on Stiglitz’s views as expressed in his book, http://www.amazon.com/Rewriting-Rules-American-Economy-Prosperity/dp/0393254054. “We can’t leave to market forces to solve the problems by themselves”, concluded Stiglitz, so we must rewrite the rules of the game. But he admitted that his rule changes were unlikely to see the light of day. Changing the rules or regulation of the banks won’t work; we need ownership and control.