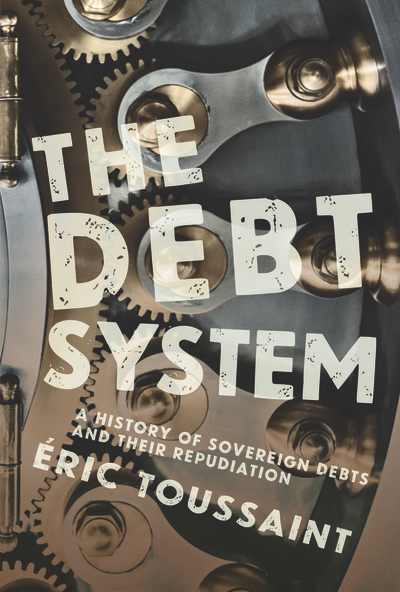 The book The Debt System. A History of Sovereign Debts and their Repudiation will be published later in 2018 by Haymarket in Chicago https://www.haymarketbooks.org/books/1234-the-debt-system . The original French edition has been published in novembre 2017 in Paris http://www.cadtm.org/Le-Systeme-Dette-Histoire-des-dettes-souveraines-et-de-leur-repudiation . It has been published in Spanish in Barcelona in January 2018 http://www.icariaeditorial.com/libros.php?id=1690

This book of twelve chapters addresses four major topics: (1) the relationships among long-term economic expansions and recessions, international trade, and external debt; [1] four case studies- Mexico, Greece, Tunisia, and Egypt- of massive indebtedness that occurred in the 19th century and mid-20th century; (3) the theoretical underpinnings of illegitimate debt, for this third topic, the author first discusses early works on the subject and then defines illegitimate debt according to whether or not indebtedness contributes to the development of the indebted country, if creditors acknowledge the negative effect of the loan on the debtor country, the loan can be considered illegitimate and subsequently repudiated; and 4) two case studies in which illegitimate debt was repudiated and the debtor countries continued to have access to international credit. The author’s general proposal is to perform domestic and external audits, in order to identify which debt is illegitimate and should be repudiated.

Chapters 1 and 2 deal with long-term expansions and recessions related to international trade and external debt. Based on Ernest Mandel’s theoretical framework, the author shows that capitalism is prone to long-term expansions and recessions of different time spans and that are determined by exogenous factors. Advanced as well as peripheral countries are exposed to the behavior of these long swings in the world economy. However, at the end of a long-term expansion in developed countries, a financial crash or an increase in interest rates may occur which impacts peripheral countries, thereby triggering a debt crisis and at the same time reducing the volume of international trade (a collapse of the terms of trade). Then, it is clear that a crisis is contagious, spreading from the developed country to the peripheral and not the opposite.

Chapters 3, 4, 5, 6, and 7 describe illegitimate debt processes in Mexico, Greece, Tunisia, and Egypt, mostly in the 19th century and the beginnings of the 20th century. First, instead of Mexico repudiating its debt in the 19th century or trying to increase taxes on the wealthy, the country ran a massive process of indebtedness with a high interest rate that did not benefit the Mexican population. Contrary to attracting development, Mexico failed to keep pace with other countries. Meanwhile, Greece, in the present as in the past, has been dominated by other European countries: in the 19th century by England, France, and Russia (for the author, the first Troika), and currently, since 2007, by the heavy burden imposed by the contemporary Troika (the European Community, the European Central Bank, and the International Monetary Fund). Finally, Egypt and Tunisia became heavily indebted at the end of the 19th century, at the time of worldwide imperialism. England and France encouraged their indebtedness process, and, subsequently, both Egypt and Tunisia defaulted.

In Chapters 8 and 9, the author analyzes the forerunners of the concept of illegitimate debt and synthesizes a new approximation. A debt can be considered as illegitimate if taking it on does not contribute to the indebted country’s development concomitant to the creditor country’s acknowledgement of this situation. According to this line of thinking, both dictatorships and democratic governments may accumulate illegitimate debt. Based on Zacharia, the author states that the ultimate goal of a government must be to preserve the lives of its citizens and not pay illegitimate debts. For this reason, it is acceptable for countries that have acquired debt to repudiate it. Such repudiation has occurred in Portugal, the United States, Costa Rica, Mexico, and the Soviet Union.

Finally, Chapters 10 to 12 deal with two cases studies of countries that repudiated their debt and that were not excluded from obtaining international credit: Mexico and Russia. First of all, in the Mexican case, this country did not pay its debt with Benito Juarez during the Mexican Revolution of the 1930s, and during the 1940s, due to external circumstances, its external debt was reduced by almost 90 percent. On the other hand, Russia repudiated its debt in the late 1910s; however, it regained access to international credit by 1926. For the author, it is better not to pay debt service than to pay. Countries that pay down their debt, bear the heavy burden of debt service and commit to fiscal and monetary austerity. If they do not repay debt, growth and development may occur where the repudiation of debt has the support of the majority of the population.

This book includes an explanation of the process of indebtedness in which some countries have found themselves and a proposal about how to stop it. From the theoretical side, the author’s arguments are along the same lines as explaining the behavior of capitalism with long-term expansions and recessions, as other scholars have previously carried out from different perspectives (Shaikh 1992, Roberts 2018, and Marichal 2014). On the side of praxis, the argument opens options to evaluate specific cases of external as well as domestic debt and the repudiation of the debt now that countries like Argentina, Brazil, Ecuador, Mexico, and Venezuela are asphyxiated by debt service. It also invites us to question why debt audits have not been so successful in many countries, such as in Ecuador and Paraguay.